Deal or No Deal - All Humanity Is Here

As a statistician, it’s fascinating to watch Deal or No Deal as it is a great example of game theory, mathematics, fear, greed and irrational thinking.

Detractors of the show don’t understand where the tension or excitement is in opening a random selection of boxes but the reality is that the game has something in common with poker in that the banker is trying to gauge the contestants appetite for risk by offering the smallest amount that they think will be enough to tempt the contestant to accept his offer to ‘buy’ their box.

The chart below shows the difference in the average box value of the contestant and what the contestant received , if nobody ever dealt and just took what was in their box, they’d be an average of almost £9k an episode better off.

With well over a thousand episodes that’s over £10m the banker has avoided paying out compared to if all contestants formed a collective, never dealt and shared their value in the box equally (although this would of course make for a terrible game show). 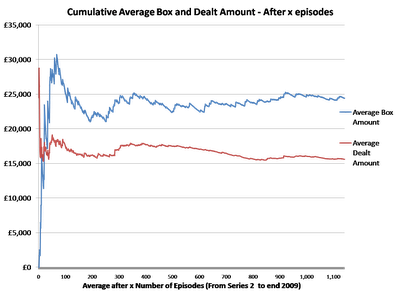 From a summary of outcomes of these episodes you can see that the player ‘wins’ more often than the banker (i.e., receives a greater amount than the value in the box) but that when the banker wins, he wins a greater amount.
This is because in situations where a contestant left with one small and one enormous sum of money for example the contestant will often deal at a value far below the mean of the two boxes for fear of going home with next to nothing.
Outcome Summary:

You might say all this is very well but what has this got to do with running a business? The first lesson is being able to differentiate between what is random and what is a trend, all too often people focus on the last few events and try to rationalise these rather than looking at the bigger picture. If there’s been a run of low value boxes then people think a high value is due when in reality every episode is an independent event.

It’s also a lesson in yield management in that the banker attempts to provide an offer that is sufficiently high to be acceptable but not as high as the true value (therefore the margin between these two figures can be considered as ‘profit’).

This can be applied in business by varying the level of offer for someone to join, return as a customer or upgrade a level as depending on their circumstances and affinity with your organisation they will need a different level of incentive to accept.

The more you know about a customer the more you can tailor your offer to get the person to deal at a price that’s right for you.

Note: Stats for this blog relate to activity from Series 2 to end of 2009 – raw data taken from http://www.dealornodeal.co.uk/backstage/stats/
Posted by Analysis Marketing at 21:23